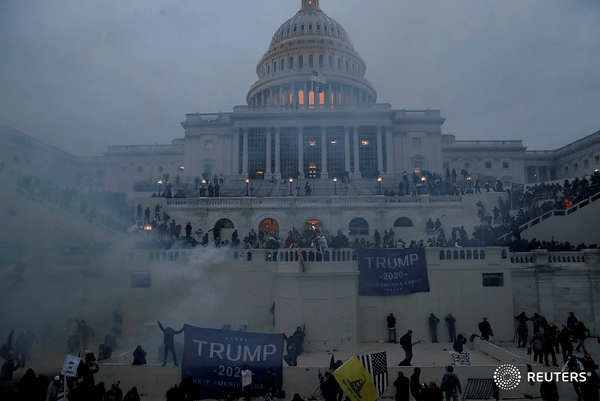 What should have been a sacred certification ceremony, has now turned into utter chaos at the United States Capitol. Supporters of President Trump have unleashed a Coup attempt on American democracy this afternoon.

Today, Congress began a joint session debating President-Elect Joe Biden’s victory with the certification of the Electoral vote. Republicans of both houses planned to object the results and delay the certification. This prompted Vice President Pence to release a statement earlier this afternoon, reminding the public that he does not have the power to overturn the electoral votes.

Prior to this, the President held a rally in which he called for his supporters to march on Capitol Hill, which lead to many of them using social media to plan and mobilize this storm. This rally call has resulted in thousands of Trump supporters staging a coup against the state of American democracy.

The Trump supporters stormed the Capitol during a joint-congress session to ‘take back the election’. Rioters had broken into the buildings and breached into the Congressional chambers causing the Capitol to be put into a complete lockdown as law enforcement is in a stand-off with the Trump rioters. There have been reports of some of these protestors being armed with firearms, as well as reports of minor explosions outside the building earlier this afternoon. Members of Congress were promptly evacuated when the chaos broke out, all equipped with gas masks and brought to undisclosed locations to remain as safe as possible.

The rioters were able to infiltrate and breach the Senate floor, through force. They broke down windows, jumped over barricades, and got inside the Capitol buildings. One rioter left a cryptic note on the desk of the Speaker of the House Nancy Pelosi that reads “We Will Not Back Down”. There have been two reported pipe-bombs found within the buildings according to CNN reporters. One woman was shot during this riot and has been reported to have passed away after being shot in the chest.

During this time, President Trump was mostly quiet. He took to twitter to briefly tell his supporters to be peaceful, though those words fell onto deaf ears as the mob continued to pile inside the building and surrounded it from the outside. The President in the past has called out other protesters for being “too violent” and sent the National Guard yet refused to show the same force for the Pro-Trump mob. Ivanka Trump, the President’s daughter was even bold enough to call them “American Patriots” in a now deleted tweet. What is patriotic about storming the United States Capital, the largest symbol of western democracy?

It wasn’t until after President-Elect Biden had addressed the Nation and implored him to direct these rioters to stand down that the President released a video statement. However, even during this statement, President Trump mostly focused on the long lasting conspiracy theory of “the stolen election”, and even sympathized with these rioters outside the capitol.

Late this afternoon into early evening, law enforcement from surrounding areas alongside the National Guard were deployed as backup, as the Capitol police force were out-numbered by amount of Pro-trump rioters, who showed up in massive amounts to take over the U.S Capitol. It was Vice President Pence who made the decision to send the National Guard, one that was made without President Trump. This is an unprecedented event, and Congress was put into recess until things were under control. D.C. Mayor Muriel E. Bowser enforced a lockdown starting at 6 P.M. until 6 A.M. that which no persons, unless authorized by the Mayor, can be on the streets. As of 8 P.M, Congress was able to reconvene and continue the election certification after the events had slowed down and control was restored back to the members of Congress.

Although the chaos today was short lived, January 6th, 2021 is a date that will go down in history as the day a coup was attempted in the United States, in the name of President Trump. This riot happened because an election did not go their way. Democracy was attacked today, and this time, it survived.

Gabriella is a Political Science major studying at Concordia University. She is a political activist for the One Campaign, a global movement to end extreme poverty and preventable disease.

She also uses social media to promote social justice movements and participates in local peaceful protests. After completing her degree, Gabriella hopes to enter into political journalism before attending law school. She spends most of her time keeping up with current events, reading a good book, or listening to music. At Youth in Politics, her articles focus on Canadian and American Political Affairs.